For some years my blog has been inactive. Now this could imply that ‘not much was happening’ on a professional level but that hasn’t been the case, on the contrary. Recently I’ve been thinking about adding new content and it became clear that my old Wordpress setup wasn’t the best fit anymore for my needs. Several people I know have been very positive about Hugo and the webserver Caddy so I decided to give that a try. For hosting I chose Digital Ocean (Referral link, gets you $10 to start with), based on reputation, pricing and their excellent technical articles.

In this post I’ll summarize the steps taken to migrate content to Hugo and setup Hugo and Caddy on a VPS. Provisioning code using Ansible is on GitHub. 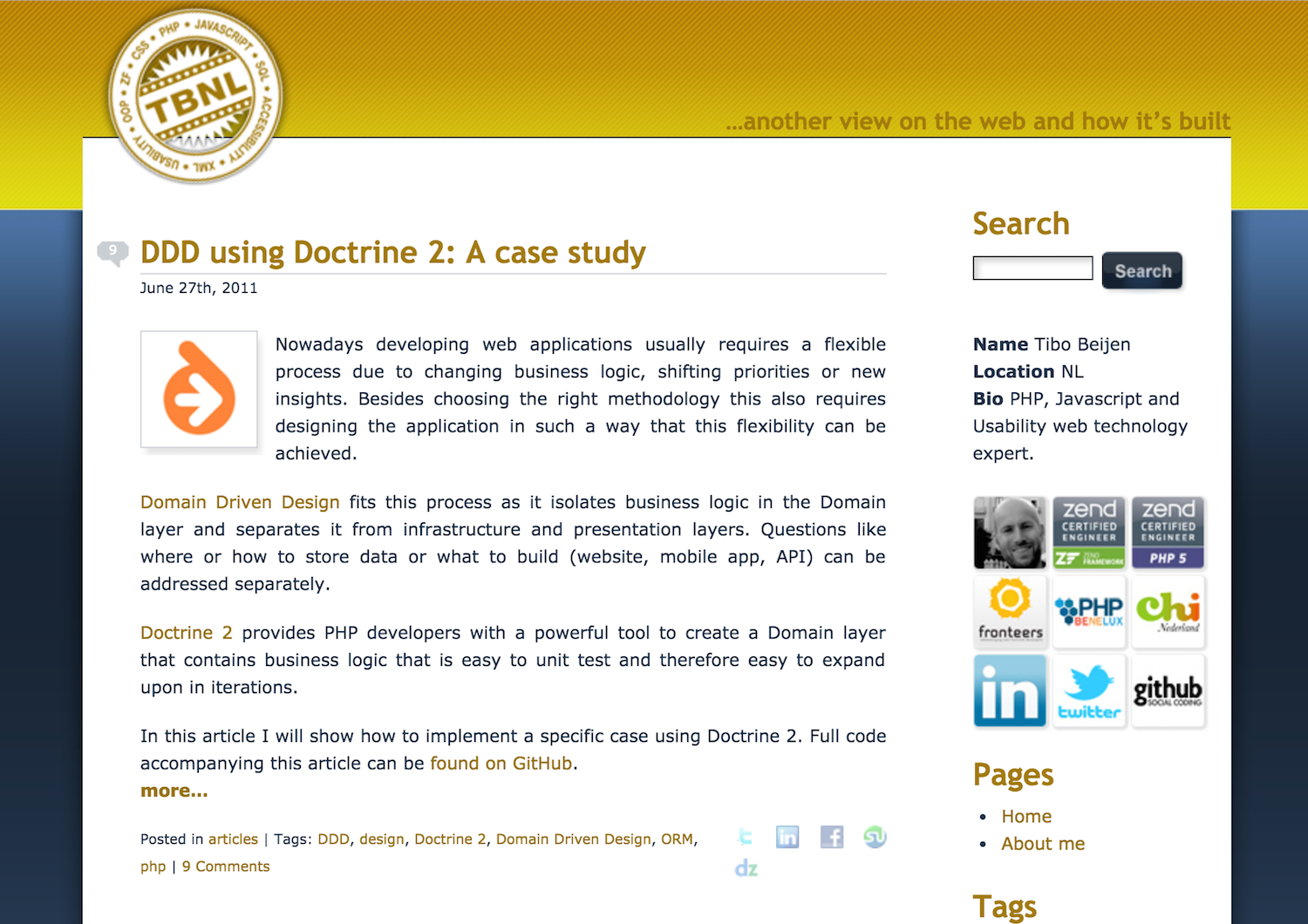 Advantages of Hugo and Caddy over Wordpress

Some of the advantages of the Hugo/Caddy setup over Wordpress as I see them:

Regardless of the advantages, the design was outdated and templates were not responsive, so work needed to be done anyway.

After exporting, a Hugo site structure was created containing the blog posts and pages in Markdown format. Some things needed additional fixing, most notably code blocks, which were exported as HTML fragments using pre tags instead of indented code blocks. Cooking up a python script solved this quite easily.

Using the official Disqus Wordpress plugin, it’s fairly easy to export comments. Be sure to test this first on a test site you’ve created in your Disqus profile. (Basically: Follow the Disqus guidelines for development sites).

As it turned out, in Disqus https and http are considered different domains. So initially comments didn’t show up on my ‘production’ site (I tested import using http, so missed that part). Although the ‘Domain migration tool’ seems like the right tool for this conversion I ran into some bumps, resulting in quite a mess. As explained in this article, the ‘URL mapper’ works fine for this case.

For initial server setup I used CloudInit. By providing a cloud-config script, important parts of the server configuration can be completed even before logging in. This includes:

Because of some details I’ve encrypted the cloud-config using Ansible Vault. There’s nothing in there that’s not explained in DigitalOcean’s cloud-config tutorial and various examples on GitHub.

For configuring everything not covered by Cloud-Init, I used Ansible.

Although for a single VPS this will probably take more time than simply installing and configuring some packages manually, it has some important benefits:

The easiest way of installing Hugo is using your distro’s pacakage manager, in my case apt. On Ubuntu this installed version 0.16 (Dec. 2016). The downside is that the latest version of Hugo is usually not available yet in the default repositories.

Currently Hugo is already at v0.18.1 so I’ll upgrade soon. As Hugo seems to tend towards using snap packages, I’ll look into that. Sadly there doesn’t seem to be an Ansible module for snap packages yet.

For Caddy a fine2 role exists on Ansible Galaxy: antoiner77.caddy. Nevertheless, I copied it to my project and modified some parts:

Reflecting on the above

Although present both in cli command and Caddyfile in a Let’s Encrypt in 90 seconds tutorial on Daplie.com, based on the Caddy cli docs the -email switch doesn’t seem neccessary. Quoting: “Email address to use …if not specified for a site in the Caddyfile”.

Furthermore, after I started using the Caddy role, there has been an update that includes the systemd service file in the role, instead of copying it from the Caddy source files. This will make it much easier to make parts of it configurable via group vars.

I plan to issue a PR with some of these tweaks to the Caddy role.

I’ve added a variable caddy_lets_encrypt. This allowed me to test the setup on a non-HTTPS Vagrant setup. Furthermore, it allowed me to start using Caddy’s 0-config Let’s Encrypt feature without breaking things, as Caddy will not start when it can’t validate the domain. As I initially still had my Wordpress site running elsewhere this would case problems. So my roll-out has been:

Be sure to read the Caddy automatic https guide. Especially note that:

For fun I keep my first site alive, a JS-heavy SPA from the times when XMLHttpRequest wasn’t widely available yet. I’m interested to see how long it takes before it really breaks. So far it still works pretty neat, on desktop resolutions that is. I’m going to write in more detail about that in another post.

Caddy’s git extension is what really makes the Caddy & Hugo combination fly. A push to the master branch is all that it takes to trigger Caddy to check out the code and build a new Hugo site.

I had two things on my wishlist that weren’t implemented as smoothly as hoped for:

I originally had the theme submodule defined as ssh link. However, when installing Caddy reported errors about not being able to access the deploy key I provisioned in the caddy home folder. Double checking permissions, trying the same steps as caddy user, all worked fine. This part I worked around by switching the submodule reference to https.

When setting up the pushover script I ran into the same issue, and then discovered that systemd has the ability to protect home folders, which is turned on in the systemd script provided by Caddy. This could also have been worked around by adding the curl command directly in the Caddyfile.

As Caddy doesn’t run as root and file permissions already provide a good level of protection with regard to ssh keys, I found no reason to not disable the ProtectHome feature. The security part now looks like this:

Pushover is a great notification service that allows sending notifications using a variety of delivery formats for applications you can configure in detail. We use it in our team for monitoring notifications. By setting different icons it’s easy to distinguish ‘hobby stuff is broken’ from ‘people are gonna call any second now’.

Having set up Pushover already, an easy finishing touch is setting up basic monitoring. Uptimerobot has a free plan allowing up to 50 monitors at 5 minute intervals. It has integration with Pushover, although it asks for the ‘user key’ instead of the application-specific ‘API token’. You can also set up an application-specific e-mail address in Pushover and use that.

All in all the process of moving from Wordpress to Hugo was pretty smooth. Extracting content was fairly easy although it required quite some post-processing. Migrating the comments was a similar experience: There might be some bumps, you need to test, but it’s perfectly doable.

Caddy en Hugo make a very good combination. Especially if your use cases stay somewhat simple, Caddy is perfect. For complexer environments I suppose the benefit of practically 0-config will disappear at some point, leveling the playing field when comparing with, for example, Nginx.

For me this has been a welcome upgrade. Ditching the maintenance and plugin-bloat allows returning focus on what a blog is about: Content.

Good luck setting up your own Caddy/Hugo site!